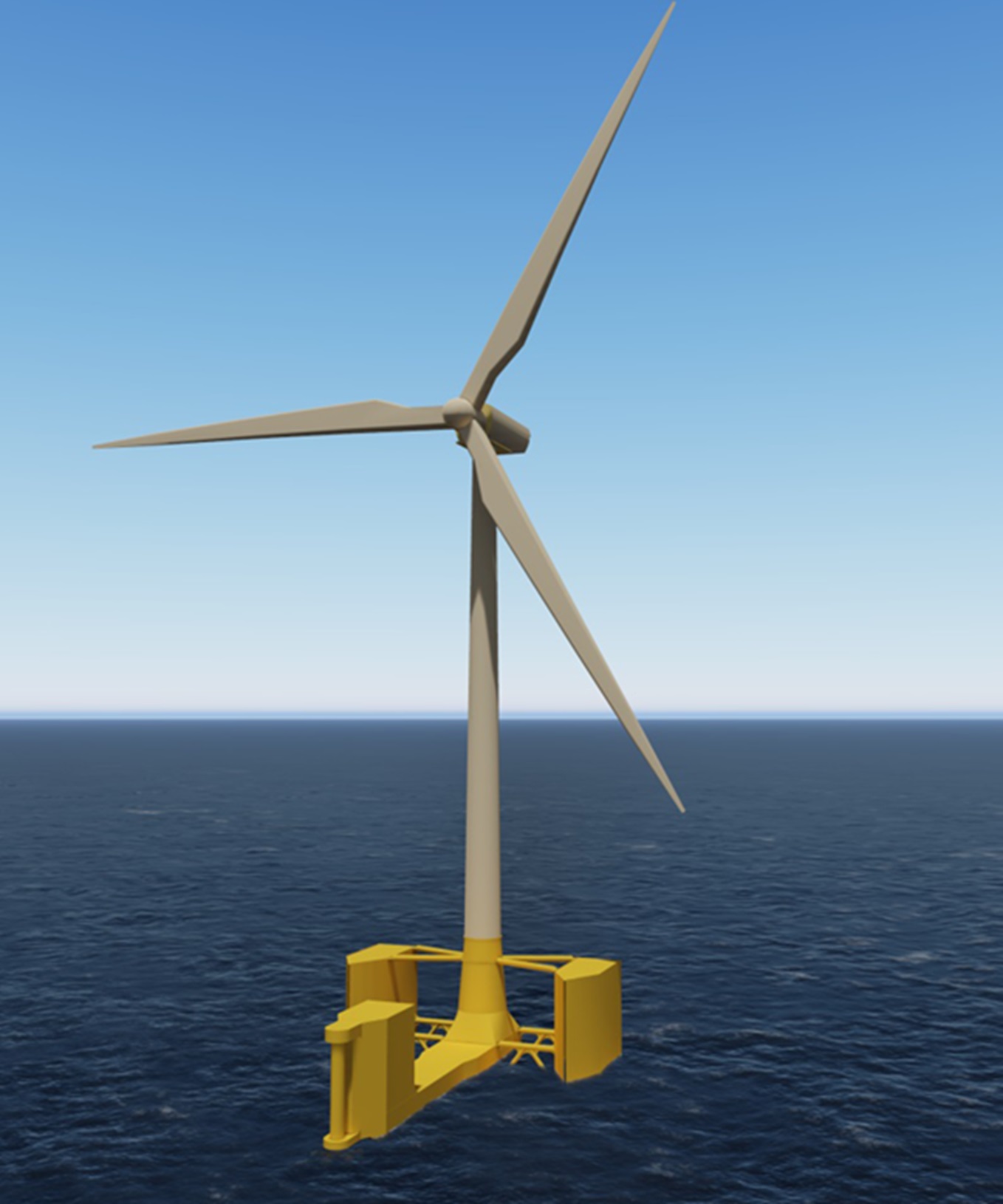 The Trivane concept is based on the premise that an optimum Floating Offshore Wind platform is a trimaran that weathervanes about its turret mooring, in accordance with the combination of the effects of the prevailing wind, seas and any current.

Trivane’s Director is Richard Martin who has been designing turret mooring for many years, with London Marine Consultants (LMC). Many potential designs for Trivane were initially considered, including a single hull and a catamaran. Attention turned to a trimaran with a long centre barge and two stabilising outer barges, with none of them submerged. This is simple to build and performs well in most sea states, but its motions are questionable in extreme seas in some areas. The initial design has now been modified such that, whilst Trivane is still a trimaran, the centre part of the centre barge is partially submerged. It thus becomes a semi-submersible weathervaning design, and this leads to very low motions in extreme seastates of up to at least Hs = 13.7m MASS PRODUCTION: Apart from the conical support for the tower, Trivane is formed from stiffened flat steel plates. During mass production, fabrication can take place at many facilities, perhaps even way inshore, because all fabrication facilities can make stiffened plates. The plates are then transported to the assembly yard by barge, or even by road or rail. In contrast, cylindrical designs require specific facilities to roll the outer plates of the hull, and these are only available in a few places
6 METRE DRAFT FOR ASSEMBLY : Trivane is designed such that it is stable afloat with a draft of only 6 metres, carrying a 15 MW turbine. It can thus be assembled and towed out from most places. The draft is increased to 20m offshore, by ballasting with sea water. SMALLER CHAIN SIZES : The combination of a) the ship-shaped form of each hull , and b) weathervaning, results in low wave loading, The mooring line loads are thus minimised, and hence the size and cost of the mooring lines and anchors is minimised. Resistance to towing, during deployment to the offshore site, is also reduced, compared to towing cylindrical structures.

MAINTENANCE IN PORT:
Offshore work at height is expensive. If major work needs to be done during the design life, for example changing the blades of the turbine, Trivane can be disconnected from the mooring system and towed to shore, entering port at 6m draft. The work is then done whilst tied up alongside a quay.
ONGOING DESIGN AND MODEL TESTS:
Trivane is refining the design and analysing it, assisted by LMC and by Morek. Model tests will be conducted in summer 2023
Trivane seeks interest from companies or individuals who might join Trivane, including partial funding of the building and deployment of a prototype. BEIS has already provided generous funding support for the design work and model tests and, subject to approvals of details by them and by the Carbon Trust, will partially fund the prototype