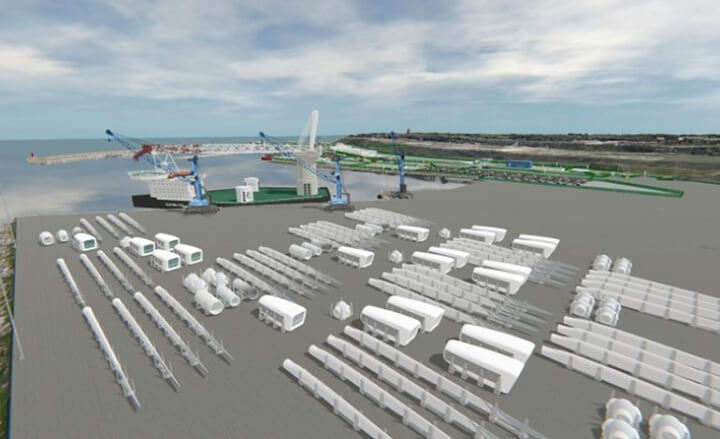 Rosslare Europort is bidding to become Ireland’s Offshore Renewable Energy (ORE) Hub with a €200m development plan that could create up to 2,000 new jobs.

Located in the south-east of Ireland, is one of the country’s leading ports running direct services to Europe.

It is “ideally positioned” to serve the growing number of offshore wind projects planned for the Irish and Celtic seas – the majority of which are located within 100 nautical miles of the port.

The Offshore Renewable Energy Hub proposals would provide “the key infrastructure requirements” to serve the different stages of these offshore projects, including marshalling, assembly, staging and load out of key components, ongoing operations, maintenance, and crew transfers.

Development of the port’s infrastructure to deliver these capabilities would encompass a purpose-built quay and berth, alongside quayside storage and pre-construction areas of up to 50 acres.

A navigable channel dredged to at least nine metres would also be developed, as well as a management control centre and associated office facilities.

“We have engaged extensively at European, national and regional level to understand the needs of the ORE industry.”

“It is clear that not only is Rosslare Europort uniquely placed to support the development of the industry, but that this development can be a transformative one for the south-east region.”

“In terms of economic potential, the south-east can be to offshore renewables what Dublin’s silicon docks are to the tech sector.”

Rosslare port authority Iarnród Éireann chief executive Jim Meade gave his support to the proposals, saying the port can play a key role in advancing decarbonization and energy security needs in the same way it has responded to the challenges of Brexit and the Ukrainian refugee crisis.